How a Beautiful Siamese Saved a Life! - Siamese Cat Breeder

How a Beautiful Siamese Saved a Life!

This story, I hope, just goes to show that when all it seems, has gone horribly wrong, fate can indeed seem to step in!

Chapter one – success at long last 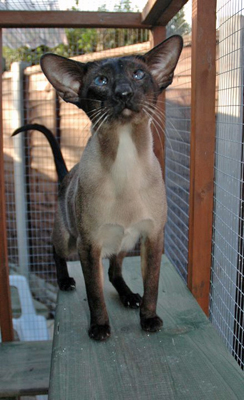 My wife Liz decided 10 years ago to go into cat showing, after ill health had cut short her 20 year dog showing days.

For most of that 10 years, she had been trying without much success to get a Siamese good enough to win shows, despite loving each and every one which joined our growing band of meezers, NONE, it seemed were destined for great things.

Then in early 2010, news came via emails, that a new red boy (Kai, Mafdet Diplomat) had been born in a litter at the home of Mafdet Siamese, bred by Carol Bowles Gowdy, it was a case of love at first sight and the arrangements were made to bring him home and Kai quickly became the love of Liz’s life.

Our red, Flynn (Bernbecks Masterpiece) boy, Kai, soon discovered that dad was a softy at breakfast time and would give him toast on demand ha ha.

At the same time, the shows started to develop a winning pattern and Kai it seemed was due to give Liz the other thing she had waited so long for.

Win followed win and by November 2010 nothing it seemed could stop him being loved so much and his winning streak.

How wrong could we have been!

Chapter two – Ollie is settling in too! 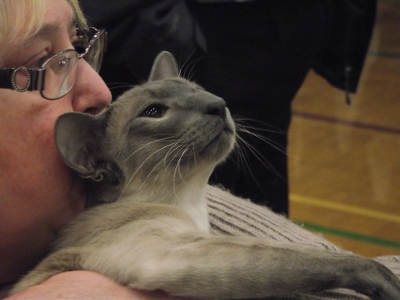 A few months earlier, visiting our good friends Brian and Linda Withers in Boston and seeing their latest litter of Tintally cats. We saw a little face pop out of one the holes in the play frame, Ollie (Tintally Just The Ticket) (also a Flynn boy) had come into our lives at a fateful moment, though we didn’t know it then!

All we knew was, he seemed to have chosen us, so home he came to live with his half brother Kai.

Ollie soon learned the breakfast ritual and mastered sitting on dad’s other knee and slimming him down by pinching more of his toast, so it became one piece for dad, one for Kai and one for Ollie.

Secretly dad didn’t mind at all, as Kai was now his big lummox and Ollie his little Ollie bear.

Liz had also been smitten by this time and Kai had become her big boy!

Kai and Ollie could be seen everywhere, in the cat bed’s together, on Mum’s bed and most often, lay across the back of mum’s chair together, Kai sat in front, with Ollie taking the space behind him, not that there was much, big boy didn’t leave a lot. Ollie never did mind, they were inseparable, in a perfect world they would be together forever, sadly it wasn’t to be.

Kai was booked in at the Supreme on the 20th November 2010, two weeks before that he hadn’t seemed quite himself, on the Monday the 8th, Liz had been very poorly in bed. I had to get her GP out to her, the meezers including Kai had spent all day lay in bed with her as if they knew she wasn’t feeling well.

The next day, with Liz feeling slightly better, I became concerned about Kai and took him on the 25 mile round trip to our vets, he was looked at and given a couple of jabs and sent home.

The next day he hadn’t seemed any better, so I again made the trip and he was given another injection and sent home.

Looking back now, I wish I had taken him straight back that evening, I will forever regret not doing so.

The following morning (Thursday) I again for the third day arrived at the vets and saw a different one, he looked at him and immediately took Kai into the back admitting him, saying he was extremely poorly.

I went back home with a heavy heart to tell Liz the news, she was still unable to go out and we had to wait till the following day to see him. We walked into the back room and there he was, sort of slumped in the pen, he was on a drip and he wasn’t able to make out who we were. It was awful, he didn’t even look like our big boy that we loved so much.

We didn’t sleep much that Friday night, we got up Saturday with nothing but Kai on our minds.

We had promised to go and see a daughter in Leeds. Liz truly didn’t want to go and wouldn’t have, but for that promise that she would.

The long trip up, went silently, neither of us could say what was on our minds, then finally, we found ourselves reluctantly in Leeds and every time her mobile went she would panic, then breath a sigh of relief when it was nothing.

Then, just after midday, the call she had dreaded so much all morning became reality.

Our wonderful, big boy Kai, had gone very suddenly down hill and sadly died quickly, just a few minutes before, of the mysterious Pneumonia infection he had somehow contracted and he had been unable to fight off. Our Kai was gone, just seven days before his supreme debut. 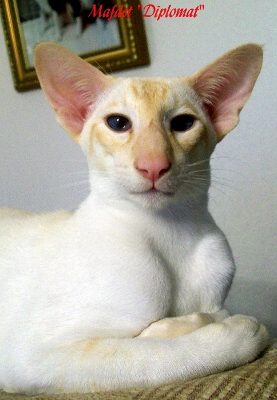 The days and the week after were terrible, Liz couldn’t eat or sleep and I was getting more and more worried about her mental state. She didn’t see any point in anything without him and I was struggling to get her even to go out!

Then the day arrived we had to go down to Northampton to Kai’s cremation. On the drive down we managed to get lost and we were panicking we would be too late, but finally we found the place, hidden away among the fields. It was quite surprising how a building so Farm looking from the outside, housed such a pleasant interior.

We were shown into this little chapel and Liz let out cry’s of “Oh! My big boy Kai” and as I entered the room, on a stage with curtains hanging each side and spot lights illuminating the centre stage, lay Kai, on a soft leather bed and covered by a leather blanket. His lovely head lay on a matching black leather pillow.

Liz took one look and sobbed and sobbed for several minutes, the tears rolling down her face, I was stood just behind her, my face wet with tears too.

We spent an hour with him, saying goodbye and saying sorry for letting him down, finally, we cut two tiny pieces of fur from his big perfect body, some red from his tail and some white from his lovely soft body. Which to this day, Liz always wears round her neck in a necklace which we ordered from USA.

Then it was time for him to go and we had to sit and wait in the reception for the remains of our big boy to come back to us in his urn.

The journey home was a quiet, lonely one, without being able to hear Kai meow as he often did going home after a show.

Chapter 5 – Time and Ollie starts to ease the pain.

For quite some time after, Liz was unable to get close again to Ollie. She wanted to, but felt she was being disloyal to Kai in some way if she did! It was down to me to give him the love and hugs and kisses till Liz was able to come back to him.

This took many many months, finally, bit by bit, she was able to cuddle him and let herself love him again, she came to realise as I did, had it not been down to fate stepping in that day in Boston, the day she found Ollie, had she not had him with her after Kai’s passing, she and I truly believe her own death would have soon followed too.

Chapter 6 – Watching over his Brother.

The day of the TPOSCC 2010 came, both Kai and Ollie had been entered, the weather days before had been horrific, snow had fallen even the night before and Liz hadn’t seemed too concerned that we might not get there, thoughts of there being NO Kai to take, lying heavily on her mind.

As it turned out, we set off at 5AM and luckily the previous days snow didn’t come again that morning.

When we arrived at the Masonic hall, it was difficult passing the pen Kai would have shown in.

But we both had the strangest feeling that Ollie was very relaxed that day, almost as if his brother was watching over him and telling him how to behave.

That day Ollie, very much to Liz’s surprise and delight won BIS, the first of many wins he has accumulated in his three and a half years with us.

He now has four titles to his name, Champion, Premier, Grand Premier and Imperial.

Thanks to fate stepping in and us buying him, he not only saved a life, he has earned himself the title of Imp Ch & Gr Pr Tintally Just The Ticket his brother would have been so proud of him, ‘Our big boy, Kai’. 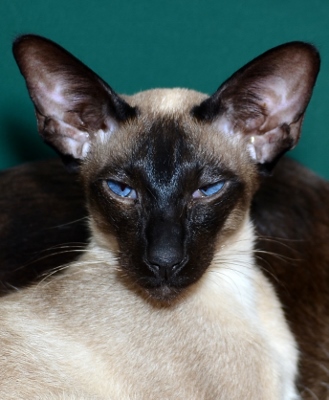 Our house once again is blessed with two Flynn boys, Ollie has been joined by DJ (Dinner Jacket, Mafdet Tuxedo) and although it’s not Kai, we love him so much and dad has again, quite amazingly, without me showing them how to do it, a boy on each knee having toast at breakfast time.

Mrs Carol Bowles Gowdy, for allowing us to have two Flynn boys in our lives, Mafdet Diplomat and Mafdet Tuxedo, we loved and love them both with all our hearts.

Mrs Linda Withers, for allowing us to share our lives with Ollie, Ch & Imp Gr Pr Tintally Just The Ticket, we can not imagine life without him.

An emotional story sent in by Graham Ellis of Liz’s Lot, many of you will know Graham as one of the show photographers for Siamese Cat Breeder.

The Supreme – a Complete Beginner’s Diary

My First Litter Of Kittens