The history of Siamese cats and the myths and tales about Siamese cats are interesting and in some ways help us to understand the breed better. 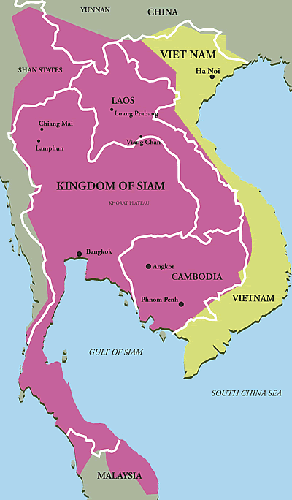 Siamese are one of the most well known and popular breeds of cat across the world. Their exact origin is not known however they are thought to have come from Siam now known as Thailand. This article gives a very brief over view of the breed and some of its history with many wonderful pictures of these beautiful cats.

It is believed that the cats belonged to the Royal Family of Siam and were used as guards of the ancient temples. Legends tell of the way the Siamese became cross eyed with kinked tails (now considered a show fault which breeders try to eradicate but this is not a health issue). The story goes that two Siamese were sent to find a goblet belonging to a King. When they found it one was left to look after it while the other returned to tell the king of its whereabouts. The one who was left was so scared of losing the goblet it stared at it and wrapped its tail around the base tightly. This caused the cat to become cross eyed and have a permanent tail kink and is passed on though its descendants. Other stories tell of the tails of Siamese cats being used as ring holders by the Royal Princesses and that is how the kinks arrived.

The History of Siamese Cats

The first Siamese were imported into the UK in 1884 by Mr Owen Gould as a gift for his sister Lillian. This was a breeding pair named Pho and Mia. They had a litter of kittens named Kalahom, Karomata and Duen Ngai. They were first shown at the Crystal Palace cat show in 1885. Sadly they died after the show but more Siamese were then imported into the UK. The breed became ever more popular and the Siamese Cat Club (still exists today) was founded in 1901. We have a great range of pictures of past Siamese below. 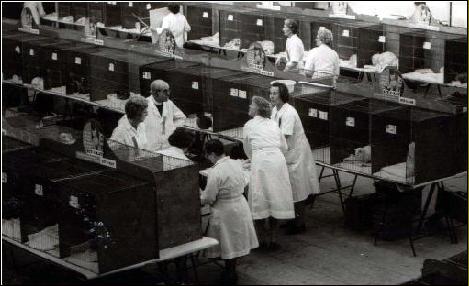 The years have gone by and the breed has changed considerably. The seal point was the original and probably also the most well known colour. More colours began to arrive as did more patterns. Today there are more than 34 different colours and patterns in the breed (you can view these in our Siamese Cat Breed Profile). These include the better known colours seal, chocolate, blue and lilac points. In addition their are profiles on caramel, cinnamon and fawn points. The profile also includes tortie points, red points and tabby Points.

There has also been some division within the breed as far as the type of Siamese. There are now 2 distinct types of Siamese cat the traditional Siamese which has a more rounded head and stocky body shape. The modern Siamese which has a wedge shape head and a much sleeker body shape. Because of the diversity of the Siamese cat many breeders prefer to specialise in a particular type or colour of cat.  Traditional Siamese are rarely shown with GCCF anymore due to the vast difference between modern and traditional type and the fact that the G.C.C.F judge them against each other makes it very difficult for a traditional to compete. However traditional Siamese can be shown under T.I.C.A and F.B and are judged separately from the modern Siamese as the Thai Cat. 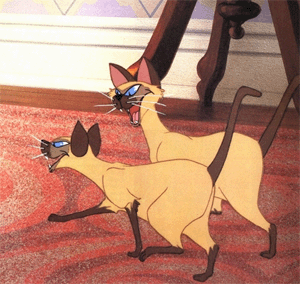 They continue to grow in popularity year on year and this is much to do with their fabulous personalities. There have been many Siamese owned by the rich and famous including Harold Wilson British Prime Minister and James Dean Hollywood Actor. They have appeared in books and films one of the most famous of these was Walt Disney film Lady and the Tramp. Sadly Si and Am the cats in the film were portrayed as nasty cats and many people believe this is what they are like in reality which is quite the opposite.

There are many other breeds which are derived from the Siamese. They have long been admired for their distinct pointed pattern, blue eyes and fabulous temperament. Permitted out crossing with other breeds have created some new breeds too. Some of the breeds who’s roots go back to the Siamese are as follows.

As you can see the Siamese breed has a very long and interesting history. You can learn much more about them by looking on line at many of the other websites about this fabulous breed.

Many thanks to Kate Burrows for putting this very nice article together. We must also thank Audrey Shepard, Jackie Reed, Naomi Johnson, May Ellis, Pippa Browning, Sylvia Gibbons, Carol Bowles-Gowdy, Marion Evans, Bill Holdsworth, Ross Davies and Mary Dean for there help and the use of their photos.