My First Litter Of Kittens - Siamese Cats and Kittens

My First Litter Of Kittens

Preparing for the Birth of my First Litter of Kittens 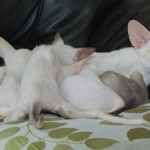 Three years ago we bought our first Breeding Queen, she was beautiful, a chocolate point Siamese we called Mia. We had other cats at the time so we knew we had to find a room in our home for her for when the time came to give birth. With lots of thought and decision made we changed my dressing room into a ‘maternity’ room for Mia. We took the carpet up and laid a new laminate floor, just in case of any sickness or mess it would make it a lot easier to clean up. We are very house proud so we make sure we clean up after all our cats as they go along, so to speak.

We also bought Mia a sofa bed from Ikea; hoping to make her feel as comfortable as possible during and after the kittens arrival. Not to make the room too clinical we also included a couple of cardboard boxes and a very large cat carrier for her to choose from as to where to have the kittens, we guessed she would probably choose her sofa though!

Being as organised as possible we also put together a little box of bits and pieces we thought we and Mia may have needed for the birth of her kittens, along with some weighing scales to weigh the kittens, her food and water dishes, all complete with new kitten sized litter tray. Sounds like quite a lot of ‘stuff’ but it all fitted in well and still left quite a bit of space for Mia and her kittens to run around in when they were ready to.

Kittens Due in a Few Days

After much deliberation we decided that Mia should be in her room overnight from four days before her due date. We had a bad night the first night we separated her from the other cats. We put Mia in her room but she missed Isak our NFC so much (they had formed quite a strong bond for such different breeds and had become inseparable); so we gave in and let Isak stay with her. But you guessed it they both missed the others too, so we let them all have the run of the house (apart from the kitchen and our bedroom) thinking they would settle with her in her room but it was like bedlam! It must have been their nocturnal instincts plus having the run of the house so we then put all the others back in their sleeping/grooming room and let Mia have the run of the house alone, our bedroom included – she’s not usually allowed in there either.

We hoped she would settle, but not a chance, she was jumping everywhere and climbing all over us in bed and over the bedside cabinets. Then running up and down stairs to and from the other cats room, when we caught up with her she was waiting outside the cats room fretting for the others and just not settling so around midnight we put her back in the grooming room with them, she went straight to Isak’s side and all was quiet until 7 o’clock the next morning when I went into groom them.

It was hard to understand it as throughout the day they loved Mia’s room and were so good, laying down and sleeping, not climbing and jumping on everything. I guess it must be the fact that cats come to life more during the night if they get the chance to prowl.

The Birth of Kittens Imminent

Mia started in labour at 7.30pm on the 4th of June and really struggled as the first kitten was tail first, it seemed no matter how many times she tried to push, it wouldn’t come…

We got a bit worried after about 45 mins and rang the emergency vet; after her trying another couple of times we had to take her to the emergency vet surgery in town, as soon as he touched her in the right place she seemed to deliver straight away and when we got back home she had the second kitten really easily.

During her pregnancy she had put on 2.5lbs in weight so we expected at least four kittens however the two of them seemed a very healthy weight, the first weighed in at 110g and the second 115g so we were pleased.

We thought the smaller one was a girl and the larger a boy, but our eyesight obviously isn’t that brilliant! They were both feeding well and Mia had cleaned them up a treat as it was very messy. Mia seemed more interested in getting back to the other cats though and wouldn’t think twice about leaving them. We kept her and the kittens on their own in the “maternity” room.

Assuming we had got the sexing right, we called the girl “Lady Chrysobel” (Belle) and the boy “My Boy Mikey” (Mikey). I wanted to call our first litter ‘The Loved Ones’ Litter so Belle is named after my mum Chrysobel and Mikey was named after my son Michael.

Unfortunately Mikey was born with twisted hind legs, I think this was due to being laid in a squashed position in the womb and the tendons were being stretched the wrong way as the kitten was developing, the vet had confirmed that it wasn’t bone related so we hoped with daily physiotherapy every couple of hours that his little legs could be manipulated into the correct position and he would walk just as good as Belle. 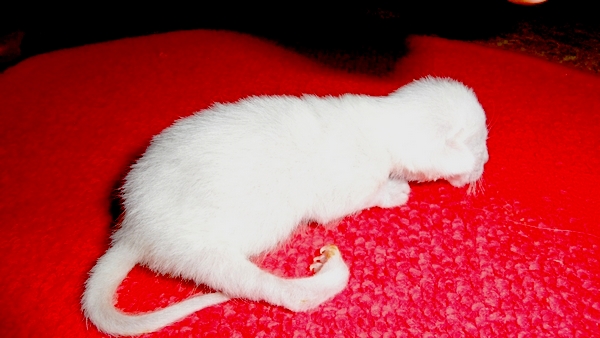 We thought we had everything covered but nothing had prepared us for this, none of the articles or books we had read mentioned anything about a kitten born with twisted legs.

On the 6th of June we had yet another shock, Mia came into labour again. Two days after giving birth to Belle and Mikey, it was really stressful as she was struggling for an hour so we rang the vet and were told to go straight there and the vet gave her an internal examination and felt a head, too large he thought to pass through so we had to leave her for an emergency C-section. The vet gave us a bottle and teats and kitten milk to hand feed the kittens all day and night every two hours.

We had just got the kittens home when the vet rang; just as he was about to administer some anesthetic to perform the operation she gave a massive push and gave birth to her third baby but sadly it was stillborn.

Mia was so stressed when we got her back home and for reasons only known to herself she tried to kill Mikey, she must have felt he was in danger as I had been massaging his legs while she was away perhaps she could  smell my scent on him and this upset her? I tried to take the kitten away from her but Mia became more stressed so I had to leave them to it and let nature take its course. I expected the worst but when we went back in to her room a little later she was happily feeding them both again. 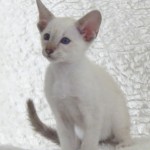 As the weeks passed it turned out that Mikey was in fact a girl, we renamed him Oopsacat Laura; Laura was named after my youngest daughter.

After a few weeks Laura’s legs were perfect and you would never know she had twisted legs when she was born, she was stunning and could run, jump and leap into the air just like her sister, all the time and patience we took in the first few weeks giving her massage and physiotherapy had really paid off, we feel very proud of the efforts we made with helping her.

We are fortunate enough to be able to work from home so we could take it in turns every two hours for 10 minutes each time to massage and straighten her legs by gently pulling into position, we did this for 3 weeks and each day we noticed her getting better until in the end we had difficulty telling the difference between her and her sister.

Mia has since had two more healthy litters and we now have a beautiful Havana we call Wispa and Taylor a pretty white Oriental, Wispa will go to stud for the first time any time now and Taylor will be hopefully be visiting one of the Burnthwaites Siamese Stud Cats early Spring next year.

So to anyone who has a kitten born with twisted limbs, don’t be alarmed, don’t worry, with lots of TLC, lots of time and devotion your kitten will be just like any other after a few weeks of massage etc.

This article was sent in by Sharon Baldwin of Daintipawz Siamese and Orientals.

Editors Note – Many thanks Sharon I really enjoyed reading about your experiences and having had a kitten born with a twisted leg myself I know from experience that it was very hard to find any information about what caused it and what to do to help the kitten. I am happy to say that my experience of a twisted limb also had a happy outcome. Many thanks for sharing your experiences.

The Supreme – a Complete Beginner’s Diary