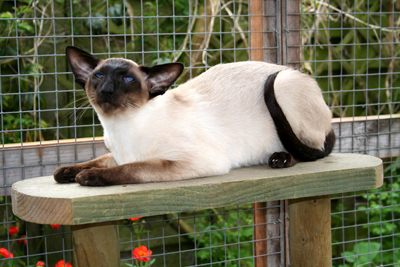 An explanation of the genetics may be useful in understanding the make up of the Balinese and Siamese Cat.

Each cell of a cat’s body (with one class of exceptions) contains 19 pairs of chromosomes, made up of thousands of genes. Each gene is a complicated chemical structure which acts as a recipe for the construction of some chemical by the body. The exceptional cells mentioned above are the egg and the sperm, which have only one set of chromosomes – formed by the random selection of one from each chromosome pair. On mating the single set in egg and sperm combine to form the normal pairs in the single cell which is the start of an embryo, and the sets are replicated as cells divide during the embryo’s development. So the offspring has one copy of each gene from each parent.

Many of the genes have mutated to slightly different forms, selection of these has resulted in the development of the various breeds. The variant forms of a gene are called alleles. When a particular gene pair consists of different alleles, what usually happens is that the recipe given by just one of the alleles is followed for each cell where the gene is active: this allele is said to be dominant to the other, or the other recessive to it. In this case the effect on the cat is as though the recessive was not present.

So a cat has a set of visible characteristics, but can pass different characteristics to its offspring. It is helpful to know about the ancestors of the cats when trying to predict the result of a mating. For example a black cat with a blue mother will carry blue and so can produce blue offspring if mated to a blue, or to another carrier. But, though from the ancestry one can determine when a recessive allele must be present, one can’t determine that it must be absent. Recessive alleles may be passed through many generations without showing up in the cats’ appearance.

So what genes are important in Siamese?

A recessive semi albino mutation which causes the eyes to be blue and the production of pigment in the hair to become temperature dependant. The pointed pattern occurs because the extremities are cooler than the body. The mutation causes all colours to be paler than in the corresponding self cat. Colour darkens with age, kittens are born white and gradually develop full colour.

All cats are basically tabby. But the tabby pattern is concealed in the presence of non-agouti. The background of a tabby pattern is produced by the pigment generating cells at the roots of hairs switching production of pigment on and off, giving bands of colour in the hair, while in the foreground production is continuous. Non-Agouti stops the switching, so pigment is continuously produced everywhere. You can sometimes see the ghost tabby pattern – often in kittens whose coat later clears. In the paler colours rings on tails are often evident. There are several tabby patterns, determined by the alleles of a different gene [T]. These are a serious problem for breeders of Orientals, where for example what should be spotted tabbies turn out not to have any spots. But all have similar head and leg markings – “M” on the forehead, penciling on the cheeks, thumbprints on the ears, legs evenly barred. The tail rings are different for the different patterns, even if difficult to see on longhair. Classic tabbies have fewer thicker rings,mackerel and spotted tabbies have narrower tail rings while the markings of ticked tabbies are blurred but they have clearer looking coats. So as far as Siamese breeders are concerned, the tabby pattern is not important, as it does not show on the Siamese clear coat (well, not unduly).

Orange changes the chemical nature of the pigment deposited in hairs and in nose and pad leather, so that the colour appears red. The effect of orange is to override seal, chocolate or cinnamon, so it doesn’t matter which of the B series genes is present, the appearance is indistinguishable. If the cat would be seal without the orange gene, then it is a seal based red. Similarly reds can be chocolate or cinnamon based. Also orange defeats the effect of non-agouti: red cats always appear tabby. (Apparently self reds are either ticked on careful inspection, or have been carefully selected for bad tabby pattern). All red series with one or more tabby point parents must be registered as tabby point until proven otherwise. This used to mean using test matings, but can now be proved by a DNA test.

Orange is a very unusual gene: its position is on the part of the X chromosome for which there is no counterpart in the Y. So in a male cat only one of the two alleles can be present: the cat either is red, or not. But for a female there is a third possibility: it may be Oo. A peculiarity of the X chromosome is that only one is active in each cell, but the inactivation of the other happens quite late in the embryo’s development, when there already very many cells, and each cell independently chooses which X to inactivate. So in some of the pigment producing cells O is active, in others o, giving the typical mottled appearance of the Tortoiseshell. Of course, occasionally male Tortoiseshells do show up, although they are usually sterile. They always represent a genetic anomaly. The most likely cause is the presence of three rather than two sex chromosomes (XXY) – this appears to be expected always to cause sterility. Alternatively, there may be two pairs of sex chromosomes (XX and XY) with only one of the pair being present in each cell. I suppose the easiest way to understand how this could happen is development from a fusion of two fertilised eggs, but no doubt the truth is rather more complicated.

Dilution causes the pigment to be spread more thinly in the hair and this weakens the colour. It is independent of the colour genes above, so one can have black+dilution = blue, chocolate+dilution = lilac, cinnamon+dilution = fawn, or red+dilution = cream. Cream can be blue, lilac or fawn based. Dilute Modifier [Dm] : normal [dm] As its name suggests, the effect of the Dilute Modifier gene is to modify the effect of the Dilution gene d: it has no effect where the Dense gene D is present. It is unique among the colour genes seen in Siamese in that it is the dominant allele which has the effect: thus, it cannot be carried (but it can be masked, by the presence of D – i.e. in seal, chocolate, cinnamon and red cats). Together with dilution and any of the alleles of Black (i.e. blue, lilac or fawn) it produces caramel. Together with dilution and red, it produces apricot.

A recessive mutation which increases hair length. The actual length, texture and amount of undercoat are controlled by polygenes. 4 mutations causing longhair have been identified. 3 of these seem to be breed specific, occurring in Norwegian Forest Cats, Main Coons and Ragdolls. The other is present in all breeds of long haired cats including Balinese. It is possible that other mutations causing long hair may exist which have not yet been identified.

The gene for silver has now been identified. There is as yet no test, but it is expected that one will be available shortly. It is dominant, but the expression is variable so that cats possessing the gene may not necessarily be recognised as doing so.

None of the above can explain why, for example, in a row of chocolate points at a show, there can be such a variety of point colour. The cats all have the same genetic make up as far as the genes discussed above is concerned, so surely they should look the same? The explanation for this is the existence of Polygenes. These are collections of genes which individually are insignificant but which have a considerable effect when combined together. They modify the effect of the major genes Some such set of genes is needed to explain, for example, the variance in colour, because the inheritance is more complicated than could be the case if there was a single gene at work. These genes are all that is needed to explain the differences between the Siamese breeds, whose genetic makeup is therefore as follows:

How does one use this information to determine what kittens are possible from a particular mating, which is after all the main reason we are interested in genetics in the first place. The first requirement is that one should know the genetic makeup of the two cats (without any of the ‘-’s in the table above). One can fill them in, either from knowledge of the parents, or from knowledge of the kittens they have already produced. So take for example a chocolate tabby point. It has two gaps – ‘A-’ and ‘D’. If the cat has a solid parent, or has produced any solid kittens, we know that the first of these should be ‘Aa’, and likewise if it has a blue (or lilac or cream) parent or has produced blue (or lilac or cream) kittens, we know the second should be ‘Dd’.

Now for each gene, one writes the possible combinations taking one of the gene pair from each parent. Thus, for a Blue Point carrying Chocolate mated to a Chocolate Tabby Point, one of whose parents was a lilac point, we have (we can leave out the o gene here as irrelevant):

It really is easier to work out what the possibilities are this way than using a table.